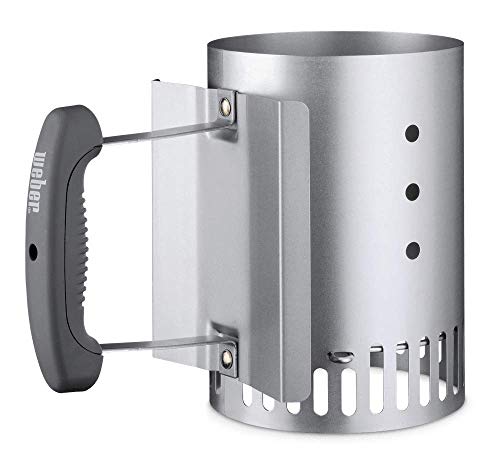 They say good things come in small packages, but others are adamant that the bigger the better. (The truth is closer to this: always use the right tool for the job. For example, if you like to grill while camping (note: we have an article full of reviews on camping grills), at a picnic, a tailgate party, or if you just like to cook yourself a little piece of meat on a hibachi, you really don’t need a huge pile of charcoal.

Weber’s Rapidfire 7447 Compact Chimney Lighter does the same job as its big brother, but it’s smaller. With a height of just over 8 inches and a diameter of 5.75 inches, this small unit is ideal for grilling outside the home or small stoves.

It has the same features as the larger Weber model, including plenty of vents, a plastic handle and a heat shield. It doesn’t have the second handle, but given its small size, I can’t imagine needing one anyway.

I like the aesthetics of the small model, with the handle sticking out the side. It kind of looks like a metal beer mug! And the long lower vents with rounded ends vaguely resemble something that comes out of the carbon freezing chamber in The Empire Strikes Back.

Some people have reported that the handle gets hot on the smaller unit, so it would be wise to wear gloves with it, just to be safe. Perhaps the smaller cylinder concentrates the heat toward the center?

You may also find that the smaller opening doesn’t lend itself to using lump charcoal. Nevertheless, having to buy a small bag of briquettes for your cooking sessions outside the house is not the end of the world.

If you’re trying to save a few bucks by buying the smaller unit, but you have a full-size grill, you’ll be disappointed; it won’t hold enough charcoal. It is, however, ideal for its intended purpose of providing fuel for small grills on special occasions.